While I do enjoy using Pester for operational validation, what do you do with the ones that fail? Most of the time you’re the one doing the validation in the chain of process and everything goes right! Because you’re that good… 😉 Hehe…  I’ve been recently asked to update some users where some attributes didn’t get populated during a migration… Are you thinking what I’m thinking? 😉

The first thing I did was export the attributes they needed, easy enough. Next was to change the necessary attributes to the correct value. The ones that differ will fail (Of course they will Urv, not a total retard here… get on with it… )

Here’s where having proper descriptions can go a long way.

This is what a Test ErrorRecord looks like when you capture the results:

At first I thought of using regex on the ErrorRecord. Some of the  attributes aren’t set which gave me some issues, so I decided to breadcrumb the name. First do a split on the colon ‘:’ grab the last part and do a split again using ‘/’ to get the attribute name and value. Don’t forget to trim() 🙂

There were some other Attributes that weren’t part of the default parameter set of the Set-ADUser cmdlet. To change those attributes you need to use the DisplayName and the Replace Operator. For the attributes “not set” that need to be cleared, use the Clear operator. Just don’t use both the parameter and the DisplayName! I had EmailAddress and mail in the CSV file, one passed and the other failed… I got rid of mail…

Ok here’s the code to get things done:

This will give me a csv file with the following Columns, SamAccountName, Property & Expected (Value).

The set failed Pester tests will either set or clear the attribute depending on it’s value. If it’s $null it will be cleared.

Here are some screenshots to give you an idea what to expect.

Ideally you’d only have a few failed tests. I wouldn’t use this to reset entire User attributes. Moving and/or renaming an object isn’t supported… yet! 😉

So there you have it, taking failed Pester tests values and setting them accordingly!

Hope it’s worth something to you,

Here’s another advantage of adding members with a different approach, Pester validation!

This makes for an easy way to process validation of  each member of a group.

Quick update: I’ve added  some extra code (at the end of the previous blog code) to export added- and revoked members.

Quick rundown, first we’ll import the saved object and used that to get a snapshot of the current group members. Then it’s time to vaildate who has been added or revoked.

In this case I wanted to generate different Describe blocks. This makes for a better distribution in the HTML report.

Here’s the code to generate the HTML report using reportunit.exe

Making sure a user is a member can be tricky at times especially when the members list is a few hundred.

As always, snapshots are your friend! When I exported the groups the first time I did it without validating if they existed. I recently ran into a situation where AD Objects were being deleted and recreated using the same SamAccountName! So having a little more information than just the SamAccountName can help when troubleshooting now and in the future.

When my project manager asked for logs and I handed him the HTML generated report of the group members… You should have seen the glee on his face!

So there you have it, verfying group membership using Pester!

Back from the PSConfEu 2016 in Hannover! It was awesome!!! It was great meeting so many in person! I highly recommend attending a conference if ever given the chance! Tobias did a great job organizing PSConfEU 2016!

The presentations were top notch! Two presentations I definitely wanted to follow were June Blenders’ Real world Pester TDD tests & Ravikanth Chaganti Operations Validation Framework. I enjoyed Ravikanth’s approach: a simplistic and a comprehensive test. June’s presentation was insightful! There were definitely a few aha moments for me! So I decided to re-evaluate what I had learned so far now that I’ve seen how it should be done! 😉 .

Think of simplistic tests as kicking the tires. Here’s where the obvious tests go:

Things of that nature. Here are some tests to help you understand some gotcha moments.

When the sets to validate are identical validation is pretty straight forward. This is the best case scenario. I did one validation with and without Group-Object (I’ll explain later on). 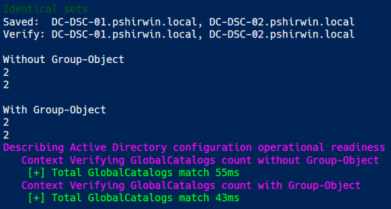 By using Group-Object I can get the “real” count of a set. Group-Object will gauge the uniqueness of the set, but I also found a test where that might not always be useful… So my next test was to omit an entry from the Verify set

Simplistic missing an entry in Verify

The test failed as it should. Now for some fun, let’s add a double entry to the Verify set.

This is an odd test, it could be a typo. Imagine having a list where double entries aren’t that obvious, this should catch it. Now ideally you’d use your source code that you used during deployment. I’m assuming you did automate your process eh? 😉 Without the Group-Object the count is identical. With Group-Object you only have one entry! This could explain an exception happened during deployment… Accidents will happen…

The last test is a fun one: different sets.

Surprise! Both validation count test passed, but the sets are totally different!

Different set with a double entry

This one almost got away. While doing the comprehensive test, it dawned on me that I should be testing both counts, with and without Group-Object. I updated the screenshot accordingly.

Don’t only rely the count of a set. By using Group-Object you can gauge a set’s uniqueness. The bonus test showed that exceptions may happen. It’s totally valid as a starting point, that’s why it’s a simplistic tests. Here’s the code for the Simplistic test for count validation:

If you’d like to try out the simplistic tests just add/remove entries to the saved-/verifyADConfig sets. Now for the Comprehensive tests!

Here’s where in-depth analysis goes. When I did the AD Operational Readiness test, I had a feeling I was missing something. I saw June using sort-object in one of her validations. That triggered me to re-valuate this test.

Depending on which set you used for your enumeration you could end up with different results. When the sets are identical, all goes well. Next test, omit an entry in Verify set.

Hey all my tests results are green and purple! Yeah… 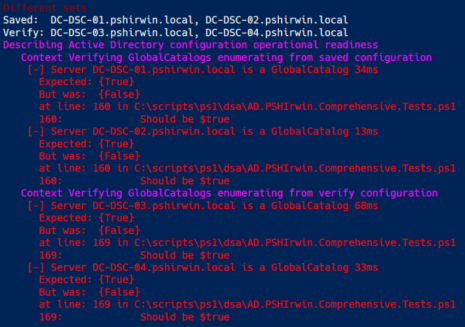 At this point you’re comparing apple with oranges. This should fail.

The set you’re enumerating from matters! To cover validation, best bet is to do both! Here’s the code for the Comprehensive Test:

Validation is great, but you need to make sure your validating with the right set in the right order!

See if you can relate. You’re in the middle of a migration, the users need to be created asap. You get a xlsx file with all the necessary properties. A quick Copy/Paste to csv file, Import-Csv  user.csv -Delimiter "`t" | New-ADUser and presto! Whew! Glad we got that out of the way 😉

Feels pretty awesome right? 15 minutes after, your project manager comes asking: “Say, which file did you use?” The one you sent me last week, why? “Uh, there’s a new version on sharepoint, did you use that one?” Well I did ask which file I should use (in my defense I did, that’s why I always email, written proof!). “Well there’s an updated version, could you make sure the users get updated? Thanks!!!” Sigh, here we go again…

At this point I can do two things:

But before you go off to update the user settings, how about validating what has been changed? Maybe the damage isn’t that bad. I mean if it’s under five changes, I just might  do it manually… Oh who am I kidding? Wait, gimme a minute to catch my breathe from laughing! 😛

With a Pester script to validate your ADUser settings, you’ll never have to second guess if the settings are as they should.

Here’s a quick rundown of the script:

$ADPropertiesToVerify =  ($csvADUsers | Get-Member | Where-Object {$_.membertype -eq 'noteproperty'}).name will get me all the properties in the csv file. No need to map properties manually. Now I can loop through any amount of properties!

Next up, making sure empty properties get $null

$null isn’t equal to empty (Ofcourse you already knew that!)

Now compare what’s in the csv to what Get-ADUser found:

Quick note: I used Path to create the user in a specific OU. There’s no Path property in Get-ADUser. So I did the next best thing, just verify that path is part of the user’s distinguishedname 😉

I also added a little bonus to verify the user’s homedirectory exists and that the user is also the owner.

Being able to validate will definitely give you peace of mind…

Group policies can be pretty tricky! Troubleshooting can be a challenge. There might be even times that you start doubting yourself. Depending on the link order of your Policies, you might not get what you expected…

Operations is dynamic, things get moved around, enabled/disabled, blocked, name it and it’s bound to happen.

How about… some way to validate your GPOs Scope of Management! Once everything is working as it should, create a validation set you can verify later on. Trust me, I’ve been there… Using Pester will definitely give you that edge…

So I improvised a little on Ashley’s McGlone’s GPO Report and made a function Get-GPOsSoM. Just be sure to save it in the same folder as Domain-GPOSoM.Tests.ps1

So here’s the result: 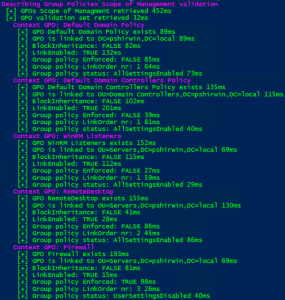 No more doubt! The link order has been tampered with! This is definitely a game changer for Operations!

My new motto : “If you can automate it, you should test it” 😛