My first introduction to Graph was at the Microsoft Technical Summit here in the Netherlands at the RAI march 23,24 this year. It was actually the last session of the day. The intended audience was for developers… I thought to myself, why not? I might pick up a thing or two… It blew my mind!

Then at the PSConfEU at Hannover, Jeffrey Snover’s Keynote ‘State of Union’ really made me reassess my career, so much so that I left my previous employment of 23 years for a much smaller company, Methos! Methos is owned by Jeff Wouters aka “The scripting dutchman”. It’s like Jeffrey Snover said in his keynote: “With transformative change, you need to change the way you think about things.” Graph is one of those transformative thing… Here’s how I got started.

So Jeff came up with an idea:

Jeff : Say Urv, I got something I’d like you to look into…

Jeff: Would it be possible to get a hierarchy of the entire company from Azure Active Directory?

Jeff: Once you have the data the next step is to visualize it!

I should have known… 🙂 Now at Methos we don’t have an on-premise Active Directory so Azure AD it is. Now as part of my “transformative change” I asked for a Macbook pro. I thought: “Hey if you’re gonna go through the change (wait that doesn’t sound right, you know what I mean) might as well go big or go home! Jeff didn’t disagree, he only grinned and let out a subtle evil laugh… I got a sneaky suspicion that I’m in for a surprise… My other Transformative change: PowerShell Core!

I installed Azure CLI 2.0 as a first attempt. To get Azure AD users:

This gave me a JSON list with few attributes. Maybe I need to add a property list or something. Let do a quick help, Hmmm… Ok… Next approach.

So here’s the deal, I’m using PowerShell core, not all modules are applicable. The good thing is that I could login to Graph Explorer.  Graph explorer gives you the opportunity to explore the endpoint and browse around.

“Hey look at that, there’s a get manager query! Maybe there’s a way to get all the data and filter out what I need (Like I always do with PSCustomObject)”

I saw one of the examples use a $select option so I decided to give it a try.

I decided to give it a try. Ok that narrowed things down a bit still no manager in sight! Turns out manager is a special kind of property, a Navigation Property. You can extract it from the MetaData

Ah, that’s why manager is omitted, it isn’t part of the collection! My next challenge was to retrieve the JSON payload. That’s where I ran into the accessToken dilemma.

From the online resources I inspected, authentication is the key to access (see what I did there?). I found Mark Kraus’s module PSMSGraph quite useful to follow his trail of thoughts. It didn’t work for me because I’m using PowerShell core. Now it’s time to read the document! When all else fails RTFM!

I ran into some snags with my application registration, so my next step was to reach out to the Graph team! They are on twitter just no tweets… yet! That got me in contact with Dmitry Pimenov, the PM of Microsoft Graph! I explained him my dilemma and he showed me an easy way to get the accesstoken for proto-type purposes. Finally! I can get some data to play with!

My first attempt was straight forward: get the user, get the manger for each user and then create a PSCustomObject. This isn’t optimal ofcourse. So I sent Dmitry a DM asking what is the optimal way of retrieving manager in an ODATA query. That’s when he explained that the Beta version supports the $expand option in the ODATA query.

Quick side step: Microsoft Graph supports ODATA queries, not all queries are supported yet, it’s a work in progress. ODATA is definitely something to look into… Here’s a link to get you started… Transformative change… 😉

Alright, so the /Beta returned  quite a bit more than I bargained for, but at least I didn’t have to do multiple queries. That’s when I decided to trying something new… JMESPath Query!

While using az I noticed a link to JMESpath query, what’s that?  JMESPath is a query language for JSON. With it, you can extract and transform elements from a JSON document… Sweet! Kinda like what we do with PSCustomObject, just on JSON. Here’s where having a Mac wasn’t a liability after all… I even found a vscode extension for jmespath queries! Many ways to Rome… Transformative change… (Jeffrey Snover was right, you need to rethink the way you think about things)

Using this query on the JSON document gave me the following results:

Alright! Prototyping mission accomplished! What I thought was straight forward had quite a few curves, but I wouldn’t have it any other way!

Learn to love Graph! Be open to learning new and interesting way to accomplish tasks in a new way. Transformative change  won’t be easy, but it’ll be worth it!!!

I had the pleasure of presenting at PSDay.uk recently. PSDay uk was sponsored by Ticketmaster and G-Research in London. I presented the following topic:

I’ve been fascinated by PowerShell classes since its introduction in v5. When Rob Sewell ask me to do a session at the PSDay.uk, I didn’t have to think too long about the topic 🙂

I’ll be honest that the first 5 minutes was kinda nerve wrecking. I wasn’t nervous at first until I stood there and had some kind of outer-body experience… 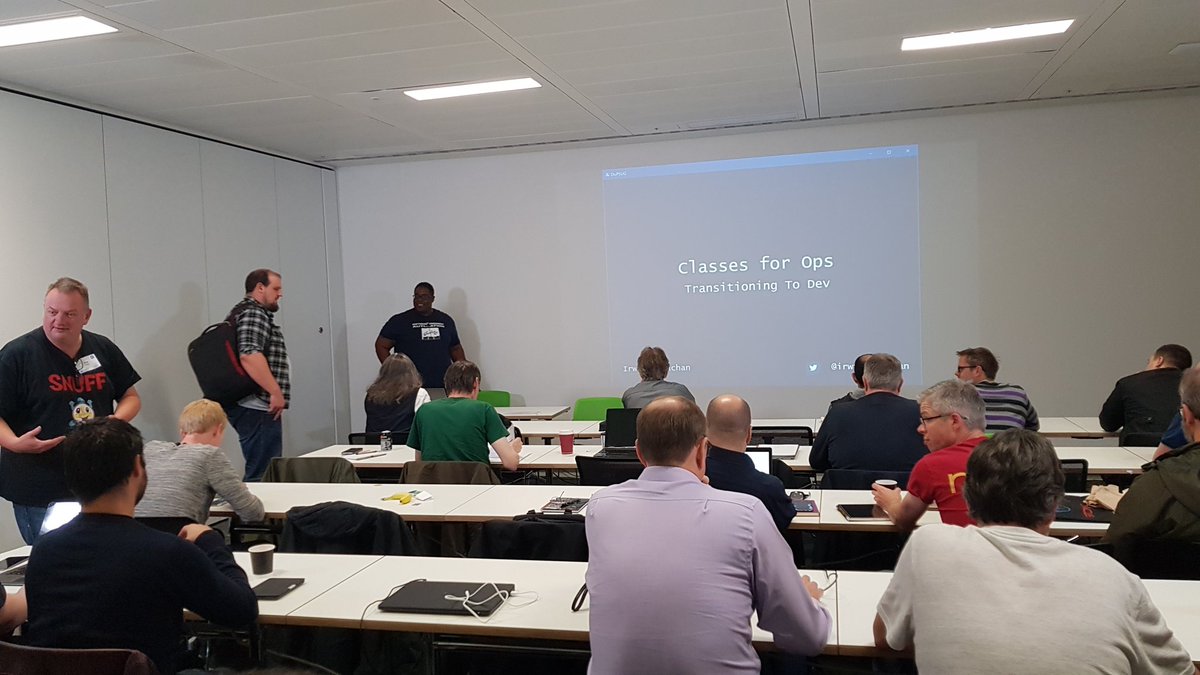 Holy crap this is really happening!!! Calm down Urv… Whooza… Get to the code…

Once I got settled in, my nerves calmed down…

The code is bases on an interaction I had with Jaap Brasser (The legend himself 😉 ) on his blog a while back. At first I thought I didn’t have enough code but it all timed-out perfectly in the end.

Here’s the link to the code & presentation.

Shout out to Doug Finke for taking the time to break down classes for me. Doug is a true Developer and an great guy! I truly believe that the right people are placed in our paths when we need them most. Yet only if we remain open-minded and willing to learn can these mentors help us reach new levels of development. I can’t thank you enough Doug, your contribution to the community is plain awesome! You make me want to be a better coder!

Thank you PSDay.uk for this great experience! Til’ next time? 😛