I was excited to give the MS Teams module a go! I was secretly hoping for a cmdlet to send messages to channels. Unfortunately no such luck… yet! If push comes to shove you can always take the Graph route! 😉

I posted the blog on social media and that generated some interesting ideas. Emotions and opinions varied quite a bit. Prateek raised an interesting question on whether slack would become obsolete in the near future. MS Teams is gaining momentum and it integrates nicely in Microsoft’s eco system, so why wouldn’t you use it? It doesn’t have to be black or white, use whatever adds value to your business I’d say!

This is where social media can be a treasure trove at times, got an interesting tip from Brett Miller on posting messages to channels using webhooks! Ah! the missing cmdlet I was hoping for! “So basically it’s just an Invoke-RestMethod?” Cool! I gave it a spin:

Nice! Hmmm… Webhooks eh? Sounds familiar… Where did I read about that? Ah yes! Stefan Stranger did a blog about that. To be honest, I did read his blog, but at that time I didn’t have access to Teams… 😉 Just follow his instructions and you’re golden!

Here’s when the fun really started! Come to find out that there’s a lot more you can post using the message card reference! There’s even a card playground where you can try out your message cards. It’s all JSON, no problem, we’ve got cmdlets for that.

There’s a whole design guide on Messagecards. Best of all it supports MarkDown format! I tried a sending a table but that didn’t work as planned.

My first attempt at DSL

Looking at the MessageCard format I thought: “This would be interesting as a DSL (Domain Specific Language) implementation… Hmmm…” I’ve been meaning to look into DSL after reading Kevin Marquette’s blog series on the subject. Seems now is a good time as any to start! This is what I came up with so far… It’s a work in progress ( sharing is caring) , but it works!

And here’s the result: 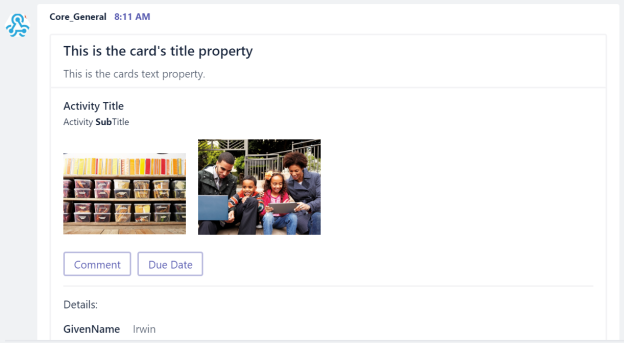 I used the full card format as reference.  I realize that others in the community could easily knock this out the park. Maybe we can make this a community project? I would love to see what the possibilities are here…

Turns out not having a Send-TeamMessage wasn’t as painful as I thought it would be. Many ways to Rome…

Shout out to Brett & Stefan! Gotta love the PowerShell community!!!

Hope it’s worth something to you,