I’m a fan of HTML for reporting purposes. In the past I’ve dabbled in creating reports using XML in combination with CSS. The challenge was creating a well-defined XML file. If you’ve ever had the idea of using Export-Clixml to combine with CSS then you’re in for a disappointment! ConvertTo-HTML is a better fit for reporting. Having said that, creating a well-defined XML file can also be a challenge. As luck would have it there’s a mini-series on the subject, check it out if you want to go down that route.

My favorite way of creating HTML reports these days is using PScribo, brought to us  by Iain Brighton. I saw him demonstrate the module at the PowerShell Conference in Stockholm on youtube. PScribo sure makes creating reports easier! PScribo supports different output formats:

You can also edit the style of your document. To get a better impression of all the possibilities have a look at the video. The module has enough examples to help you get started. Before you know it you’ll be hooked!

I’ve recently discovered markdown. If you’re comfortable creating HTML documents, then MD shouldn’t be much of a challenge ;-). BTW if you’re looking for a good MD reader, vscode has you covered. VSCode is gaining momentum in the PowerShell community. I’ll admit to being hooked on ISESteroids, still,  Tobias Weltner said there will be a major update pretty soon… So who knows what this might mean?

I decided to give it a try in MD Format as well! 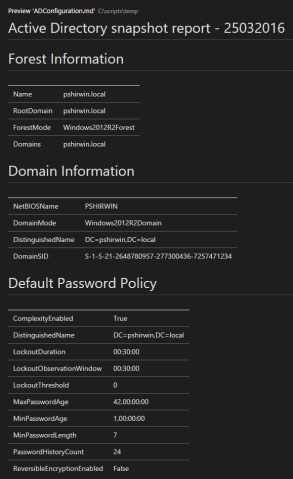 MD format has a small footprint which could be interesting. MD files can be converted to other formats. Doug Finke has an excellent vscode extension to render md files in pdf, word or html, using PanDoc.

PScribo is definitely worth a try! MD is also an option. Generating reports in Powershell just got easier thanks to Iain & Doug! Great addition guys! Keep up the good work!